my god - it's stopped raining.....or no actually there it is again 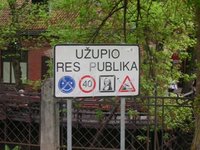 In Vilnius Cathedral, there's supposed to be this miracle tile where the last person stood who was the human chain from Talinn to Vilnius. If you spin around it three times you can make a wish. Not sure if that means it's going to come or if the spinning just entitles you to making the wish. Anyhew, we didn't find it but the cathedral is stunning - there's a belltower around the side and it's overlooked by three crosses on the nearby hill that were set to commerate three monks that were crucified there. 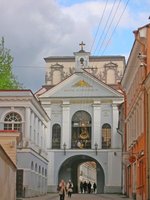 St. Theresa's church is just up Pilies Gatve from the cathedral. It's nice from the outside - we didn't get to go as there's mass on 24/7 there. There's also the icon of Mary that stored next door that has become a place of pilgrimmage for thousands in Eastern Europe. It was seemingly "souvenired" from the Crimea. That's what the leaflet said anyway. Some might call it stealing......but that would be unchristian.

Lots of coffe shops in the old town in vilnius and they sell cakes and ice cream. Oh god it's so good. The cakes are like food sculptures -they're amazing - any place along pilies gatve is worth dropping into. 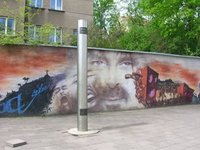 it's so wet, it's unbelieveable

Got into the western bus station (not that we knew it was the western bus station) on Tuesday at about 6.30am. Got an overnight from vilnius and expected to be in at 8.10am, so we were pretty much wondering what the fuck was going on. You don't expect to be able to get a bus across time zones being from ireland.

The western bus station is a nightmare. The lonely planet said to "just hop on a train to the center" at the adjoinging train station. Just hop on a train eh. There's about 7 fucking platforms. I doubt if every fucking one goes to the centre now does it. Finally managed to get in after doing about 4 laps of the train and bus station. Another thing - there were lads drinking beer and vodka at the station when we arrived -at 7.00 in the morning. Nice. That's what I call proactive alcoholics - I think they must have set their alarms to get up at that time. Oh, busy day tomorrow, best make an early start.

First thing we did in Warsaw was stop off at the tourist office in the old town. From the womans reaction to us walking in the door you'd swear we ate her first born. When we asked where the hostels were she threw her pen on the desk and moaned. Then got up and went to the cupboard where she got a brown parcel. She asked us whether we had a map, we said no, she went ape. I mean, how outrageous - you work in a tourist office, the last thing you'd expect is tourists. The fucking cheek of us coming in and asking for tourist information.

Well, we managed to pick up the "Warsaw in short" guidebook. Really handy - it outlines walking tours you can do. We tried out the Jewish walking tour. Started off at the umshlagplatz where the jews were transferred to treblinka during the war for extermination. Before the war there were 300000 jews in warsaw - after just 5000 - 10000 (??). Unbelieveable. Despite it actually being a nice day our walking tour was cut short by a freak hail storm with fork lightening and gale force winds which were ripping the traffic lights off. lovely. 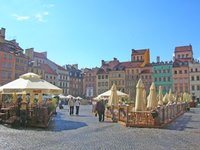 The old town in quite cool. It was levelled - raised to the ground - during the warsaw uprising in 1944 and painstakingly put back together. It's being recognised as a UNESCO World Heritage area. We went to the Warsaw historical Museum - exhibits were your usual crap " this is a bit of leather dating from 1500". But they did have good footage of pre war warsaw. Really interesting - especially seeing the ghetto fenced off. Reminds me a bit of Palestine today with the wall around the palestinian areas. Ironic eh! 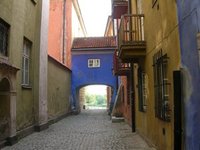 On Friday morning, there was sun. Couldn't believe it. Frikkin Sun. We headed down to Wilanow park and palace and then up to Lizienski palace and park. Really nice there - well worth heading over. We didn't actually go into any of the palaces as we're cheap asses and wouldn't have much of an interest in the interior. Also, we would definitely advise getting a day pass or a 3 day pass for the public transport - it allows you go on everything. You really need it to see the city - the old town is only a small part of Warsaw. 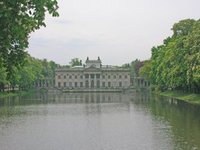 Hill of Crosses and Curonian Spit 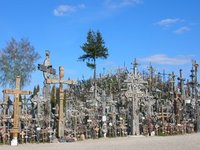 The hill of crosses in Siauliai is amazing. It's two small humps of earth that are packed full of crosses - lookes like they were vomited out of the earth. There's thousands of them. People started putting crosses there in the 14th(??) century and since then it's become a symbol of their nationalism. Obviously, during communism they were bulldozed but each night people came back and put more crosses on. It's really bizzarre hearing the wind rustling through them.

The hill of crosses is just outside Siauliai - in fairness how are we supposed to speak the language when they use that many vowels! I'll have 6 vowels and 2 consonants please Carol...

It doesn't get much mention as a town in the lonely planet but it's actually pretty nice. Definitely recommend Kapitonas Morganas as a place to eat - right in the centre.

From there we headed down to Klaipeda for the most frustrating journey of our lives. Had to get a ferry to curonian spit and a bus to nida from there. It sounds like quite a short little trip...it should be...it isn't. We did manage to hire bikes in nida which was good fun - Michelle had to hire a childs bike - too small for the adults. The baltic coast is lovely - really unspoilt and deserted - miles of beach with no-one on it...but a tad on the chilly side if you go in May (or probably any other time of year) and not great for surfing (probably to have been expected). 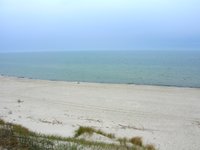 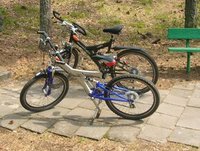 We decided to head from Nida to Warsaw as we made better time than expected. So we grabbed a bus to Vilnius and then got an overnight bus to Warsaw from there. Don't ask at the informaiton desk in the Vilnius train station if they do trains to warsaw. When I asked she didn't understand. I then repeated in my best lithuanian accent - 'Var-shah-vah'. She nodded and smiled. Excellent, she understands. So she pointed to the other end of the station. Ok, so what you're saying is that Warsaw is actually at the other end of the train station. Well, of course it is - how stupid of me, the map of europe I have is actually scaled 1:1.

why is it still so cold?

We arrived here after the most unnecesarily long bus journey from Tallinn. Cracking city - nice old town that has UNESCO heritage status. The Museum of Occupation is definitely worth dropping into: Jesus they must have about a million independence days, they've been occupied so many times. Seriously though, its pretty harrowing stuff but the museum sets it all out really well. 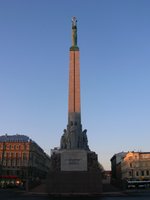 Stayed in the old town backpackers hostel. Nice place - has a bar at ground level. The first night we were there they had a party to launch their new website which meant we paid less for our beds and got free cocktails all night...nothing short of a bargain. The second night we were there though there was a big group of lads turned up for a weekend on the piss. I don't know what it is but people outside of ireland and the uk have an inability to whisper. We get slagged off for not knowing any languages other than english but surely whispering counts. I think I'm going to start courses for expats in the uk - "whispering as a foreign language". Reckon it could be a two year course - maybe three for spanish people! 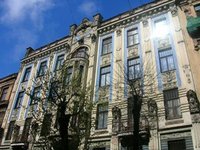 Our other adventures in the town were somewhat hampered by rain and the fact that everytime we went places it seemed to be a public holiday (we never did manage to get to the top of st peters!). But we did get to wander around the new town and the art nouveau architecture which was fab.

Headed off for a day trip to Sigulda which ia apparently the Switzerland of the Baltics and a place where you will get dizzy from the scent of pine. Its nothing like Switzerland and the trees are mostily deciduous, but its a nice place all the same! Got there from Riga on one of the old Russian trains - what it lacked in speed it made up for in unusual squeaks.

It's so cold here

i know it's eastern europe but it's supposed to be about 10 degrees. No way is it 10 degrees. The wind just cuts right through you - it's unreal and it's almost may.

When we were queuing up for our passports to be checked, hey were playng pet shop boys 'go west'. They trying to tell us something? 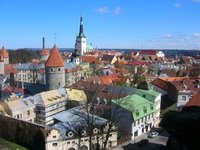 Tallinn old town is fucking cool though. Really easy to get to. Just grab the bus from the airport (get a ticket from the r-kiosk inside the airport 10EEK). Get off at the Vira(?) bus station and it's just around the corner. 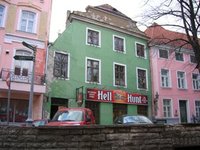 We stayed in Old House Hostel - pretty decent. Great location in centre of old town. Went to Krahl's bar - they were playing the Cure as we went in, you gotta love that. Saku is the local beer here - it's well decent. Hells Hunt bar is by far the best though. 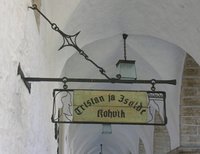 Loads of cool coffee shops to warm you up too - Tristan ja Isolde on the main square is fantasic (especially the Vina Tallinn coffees!).

Also, headed out to Kadriorg Park. It's just a park really. Get a bit suckered in by the lonely planet saying you'll fall in love with the statues. Who falls in love with statues?

Got the bus out on Tuesday. 5 1/2 hours. The most unnecessary 5 1/2 hours of my life. It stopped at least twice for 10 mins at a time and had about 6 pickups including 3 in tallinn. Estonia is so flat which made the journey 10 times longer but you get a really big sky.